Realme X7 Pro 5G Review: A battery behemoth but the camera is a downer

Realme X7 Pro with 4500 mAh battery 5G Phone Review: Competes with Vivo V20 Pro, OnePlus Nord. Check Specification, flipkart sale date, price in India. The Realme X7 Pro 5G is the latest challenger in the mid-range segment from the Chinese smartphone maker. A lot is riding on the X7 Pro 5G considering the company is bundling this smartphone with some stellar tech and at the same time

The Realme X7 Pro 5G is the latest challenger in the mid-range segment from the Chinese smartphone maker. A lot is riding on the X7 Pro 5G considering the company is bundling this smartphone with some stellar tech and at the same time offering cut-throat pricing. Also Read - Realme 9 series confirmed to arrive in India, details to be out on September 9

In India, the Realme X7 Pro 5G has been launched for Rs 29,999 for the 8GB+128GB variant and this is the OnePlus Nord territory. A glance at the X7 Pro spec sheet got me off the chair as I was impressed with what Realme was able to fit into this 182-gram gizmo. To quell the curiosity of what this smartphone is capable of we put it through the test and squeezed out all that we could in the few days we had the device. Also Read - Deal of the day September 2: Massive Rs 3,000 flat discount on Realme X7 Max on Flipkart today

So, is the Realme X7 Pro a worthy contender in the mid-range market and should you buy it? Let’s dive deeper. Also Read - Realme Pad slim design teased, could launch on September 9

If good looks is something that’s on top of your priority list then you’re going to like the X7 Pro 5G. The company has approached the design philosophy for the Pro with as much minimalism as possible. It’s not an “in you face” design but still manages to stand apart.

The right use of glass at the front and the back gives it a premium look not to mention that its Gorilla Glass 5 at the front for that added durability. The glass de facto is a fingerprint magnet but that’s the compromise you have to make if you want that extra bling. What’s deceptive about the back is that you don’t feel it’s glass until you gently tap it against your teeth. That’s what I did. The metal frame houses the volume rocker to the left and the power button on the right and everything seems right in place.

It comes with a 6.5-inch FHD+ Super AMOLED display that maxes out at 120 nits of peak brightness. The company has said to have used special E3 luminescent material that makes the panel 30 percent brighter and what is on paper translates in reality. The X7 Pro doesn’t struggle under direct sunlight and is able to balance both contrast and color under artificial light. It’s bliss viewing content on this display and the 120Hz refresh rate is the cherry on the top. The animations and transitions are smooth though I’d recommend you to use darker themes and dark mode as the extra pixels and refresh rate will eat through your battery much faster. Overall, a fantastic display and a benchmark for other smartphones in this price range.

In terms of processing power, the new Dimensity 1000+ processor is breath of fresh air. I will admit I had my doubts but the new hardware has been able to come through with flying colors. From high-definition games to running multiple applications at the same time, the X7 Pro has been able to take everything head-on. The 8GB of RAM helps along the way. An added feature that is a bonus for people who like to binge is the support for AV1 video decoding format. This is the latest video streaming tech that’s pushed by top content providers making the viewing experience more immersive with better sound. Speaking of sound, the X7 Pro comes with Dolby Atmos dual front-firing speakers enough to blow the roof. Loud, crisp and a perfect companion for gaming and watch content if you’re not in the mood for headphones. Just FYI, it does not come with a 3.5mm headphone jack but the box comes with a3.5mm to USB type-C adapter.

Apart from support for dual 5G SIMs which major flagships in the day do not support the X7 Pro also adds Wi-Fi 6 support. What’s interesting is that it manages to balance both the Wi-Fi and 4G connectivity seamlessly without and lag. The Realme X7 Pro comes with a dedicated cooling system inside which the company is calling a ‘Vapor Cooling System’. The added advantage with this is that you can plug the charger in while continuing your online gaming sessions. A feature that’ll leave mobile gamers licking their lips.

RealmeUI has seen some drastic improvements over the past couple of months and the same reflects on the X7 Pro. Subtle additions like the side app drawer, a more organised notifications drawer are some welcome changes. I am still not a fan of the bloatware that Realme bundle with their phone and hope that the company looks into this for its future devices. And we come to the biggest reason to buy this phone, the battery.

The Realme X7 Pro comes with a 4,500mAh battery pack that charges via type-C. The headline maker is the addition of 65W ‘SuperDart’ fast charging technology that gets your smartphone from 0-100 percent in just 35 minutes. While charging I got the following numbers:

This battery behemoth offers more than just these impressive numbers. The 4,500mAh is more than enough to last you at least 2 days with average use. However, it depends on what resolution you’re running the display and how long your gaming/binging sessions are.

The camera has been a bitter disappointment. My past experience with Realme cameras had been good but a few days with the X7 Pro has left a bad taste in my mouth. Despite boasting some very impressive numbers on paper, the X7 Pro camera quality (both front and back) has been underwhelming and not up to what the competition is offering.

For context, the Realme X7 Pro comes with a quad-camera setup at the back with a 64-megapixel primary Sony IMX  686 sensor with f/1.8 aperture, an 8-megapixel ultra-wide lens with a 119-degree field of view, a 2-megapixel black and white portrait camera and a 2-megapixel macro lens. Some of the images I clicked with the camera delivered less than satisfactory results. A majority of the pictures came out overexposed and the sensor is not able to control the exposure as per the ambient lighting. In fact, it’s controlling exposure based on the color of objects rather than ambient lighting.

It comes with up to 10x digital zoom which delivers downright depressing results. Results even with the dedicated 64-megapixel camera at not at par. I hope this is a flaw that can be corrected with a software update otherwise things look gloomy for the X7 Pro.

Here are some of the samples: 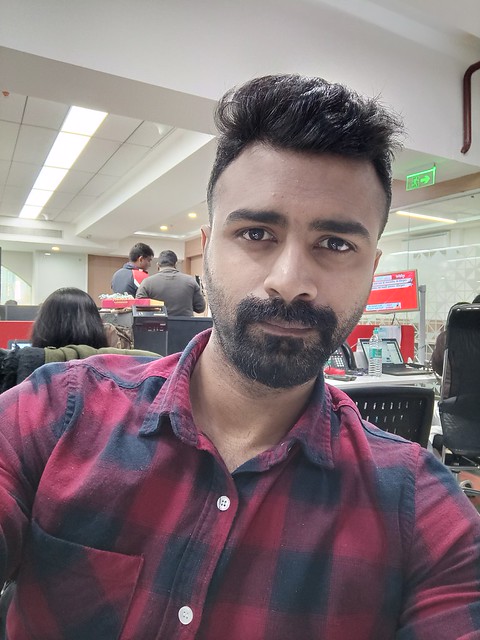 Video stabilisation seemed to have saved some of the blushes but that alone is not enough to justify the price you are paying for this device. If you are someone who is into smartphone photography then it better to stay clear of this camera setup.

And the selfie camera… I think it’s best if I don’t open that can of worms. Despite the 32-megapixels that the company has packed in the front sensor, it failed to impress me. And I don’t think the front camera needs a panorama mode. It’s humanly impossible to get the perfect panoramic picture with the front camera. What was Realme thinking?

Though the company is chest-thumping about the smartphone’s 5G prowess we never really got to test the same. Remember, no 5G in India right now. It’s not that I am doubting its 5G capabilities I just feel it’s a premature move on the company’s part to launch a phone that’s 5G ready when the rollout of 5G tech is still far from reality in India. Telecom operators have promised the availability of 5G in India this year but that’s wishful thinking as there is still ambiguity around the spectrum.

So basically, you’re paying for a 5G phone and won’t be able to use its 5G technology.

Should you buy it?

So the most important question of them all, should you buy the Realme X7 Pro 5G. Let’s first address the elephant in the room. India is not getting 5G any time soon and having a 5G phone at this time renders the whole purpose of it moot.

Folks who enjoy watching content on their phones will love the Realme X7 Pro thanks to the Dolby Audio and the vivid display. Not to mention, this battery isn’t going to leave you hanging nor have you running around for a powerbank.

The X7 Pro sadly doesn’t ace the camera department and people who have a penchant for smartphone photography/videography will be disappointed. Despite that, I don’t think that Realme should throw in the towel and work towards a solution to fix the camera as best as they can via an OTA update.

At Rs 29,999, the Realme X7 Pro competes with the Vivo V20 Pro and the OnePlus Nord and this is fierce competition. Unless you’re a hardcore Realme fan and are willing to compromise the camera for stellar battery and performance, then and then only go for the x7 Pro.

Realme X7 Pro 5G Review: A battery behemoth but the camera is a downer View Story

Instagram, let's stop being a copycat and engage people with originals

Samsung Galaxy M12 budget phone specs leaked: See what could be in store

Noise Elan earbuds review: Try killing the battery on this one

Instagram, let's stop being a copycat and engage people with originals Web Story

The defunct LG Wing is getting Verizon C-band, because 5G in this country is silly

Netflix is laying off 150 employees, including dozens from its Tudum fansite