Oppo Reno 5 Pro 5G Review: Aces in performance, UI could have been better

Oppo Reno 5 Pro 5G comes with a noteworthy spec sheet: a 90Hz display, 64MP quad rear cameras, 65W fast charging, MediaTek Dimensity 1000+ SoC. Oppo is a known name when it comes to camera-focused smartphones and each year, we get many phones as part of the Oppo clan to make our smartphone photography better. This year, we have a new inclusion in the company’s Reno series

Oppo is a known name when it comes to camera-focused smartphones and each year, we get many phones as part of the Oppo clan to make our smartphone photography better. This year, we have a new inclusion in the company’s Reno series — the Oppo Reno 5 Pro 5G — whose aim is to make your videos better. Also Read - Best gaming phones under Rs 35,000 to buy in September: Poco F3 GT, Mi 11X, and more

This is something that will interest a lot of people, for now, videos as a career is booming. But, a focus on the videos isn’t the only thing that makes the device look good on paper. We get a MediaTek Dimensity 1000+ processor (a new for an Oppo phone), a 90Hz Always-on-Display, 65W fast charging, and then the design that I adore (You can check out my first impressions article to know more). Also Read - Top smartphones under Rs 30,000 in September 2021 from OnePlus, Xiaomi and others

It’s been over some time since I have been using the Reno 5 Pro 5G. The new phone seems like a perfect package for under 40K, but is it really? Let’s find out. Also Read - Top smartphones with fastest charging under Rs 20,000: Realme X7, Redmi Note 10 Pro and more

I said this previously and will say it again: the Oppo Reno 5 Pro has a design, which will impress you. The design comes across as a refresh and is a head-turner. We tend to incline towards good-looking, visually-pleasing things, and this device is one of them. So, if the design is a factor you consider while buying a phone, this one’s a definite option.

The phone adopts the company’s Reno Glow design, which gives an ombre effect but in matte. So you get a combination of glitter and matte and the perfect bling mixture is formed. What better combination can you look for? The device has a good build quality. Although one of the materials used in the making of the device is plastic, it doesn’t feel plasticky. And the glass back ensures that further. The device is offered in two color options: Astral Blue and Starry Black and I got the one painted in Blue. The Reno 5 Pro in blue doesn’t come out as the other blue phones we have been seeing for some time now. Instead, the smartphone brings out a pretty toned-down version of the color and makes for a subtle-looking one. And when the light hits the right spot, it is a good sight!

But, this isn’t the only thing that you will like. The fact that the Reno 5 Pro is conveniently light, calls for more of your attention. It feels just right when you use it, especially if you have a habit of using a phone with one hand. Yes, there is a big 6.5-inch display but the lightweight balances things out and makes the usage easy.

The device gets a rectangular quad-camera module at the back and an ‘Oppo’ branding at the bottom part, thus, following a minimal approach. Upfront, there is a 3D curved punch-hole screen, which makes room for really minimal bezels. Ports-wise, the left side has the volume up/down buttons and the right side has the power on/off button. The bottom end has a USB Type-C port, speaker grille, and a SIM slot. The top end has a mic and reads ‘Designed by Oppo.’

The phone supports little details here and there adding to the overall aesthetics of the device, which, in turn, makes it what it is — a well-designed phone.

Display: AOD will attract you

The display on the Reno 5 Pro has proved to be the source of a pretty good visual experience. The output you get is bright, well-lit content, which makes the viewing experience pleasing. This is something I never really expected from an Oppo phone, but, turns out, the company is all set to impress with its capabilities other than the cameras. Even the 90Hz refresh rate has made the usage quite snappy and scrolling was made quite easy. AOD was a good addition and didn’t take much toll on the battery life.

There was a slight hint of saturation while viewing the content, which also appeared vivid. But, those who like vivid won’t have a problem with the Reno 5 Pro. Among other things, sunlight legibility was quite decent.

As said several times, the cameras are the soul of the Oppo Reno 5 Pro and this, the phone proves. But before I tell you about how this section performed, here’s a quick glance at the camera specifics. The Reno 5 Pro gets a 64-megapixel primary snapper, an 8-megapixel ultra-wide lens, a 2-megapixel depth sensor, a 2-megapixel macro lens, and a 32-megapixel. The main focus this time is on the videos, so we get features such as AI Highlight Video for well-lit videos in low-light, Live HDR for videos, Dual-View Video to shoot with both the front and rear cameras, AI Color Portrait to highlights reds, greens or blues, and ‘Soloop’ for easy video editing.

Now, let’s talk about performance. I have used an Oppo phone after a really long time and had the notion that the phone will anyway give me processed images. But, this preconception just faded too quickly when I started using the cameras. The cameras can capture a good amount of details with good color reproduction and it mostly feels like a balanced photo. The ultra-wide lens is able to take in a wide area and will be useful for you to click a wide scene. However, there is color-shifting. The wide lens captures slightly vivid photos as compared to the ultra-wide lens and even the 5x zoom. Speaking of 5x zoom, it is pretty good. I was able to get a clear view of a blue gate that was at quite a distance, especially when I had to watch it without my spectacles.

The HDR mode is good also as it can churn out well-highlighted images and the Night mode produces some well-lit and balanced images in low-light. The AI Scene Enhancement mode made a significant difference to the images with better exposure and color accuracy. The macro and portrait modes, however, need some polishing. It got a bit difficult for me to get good portrait and macro shots in one go as both the dedicated lenses refused to work at times. When they did, decent images came out. 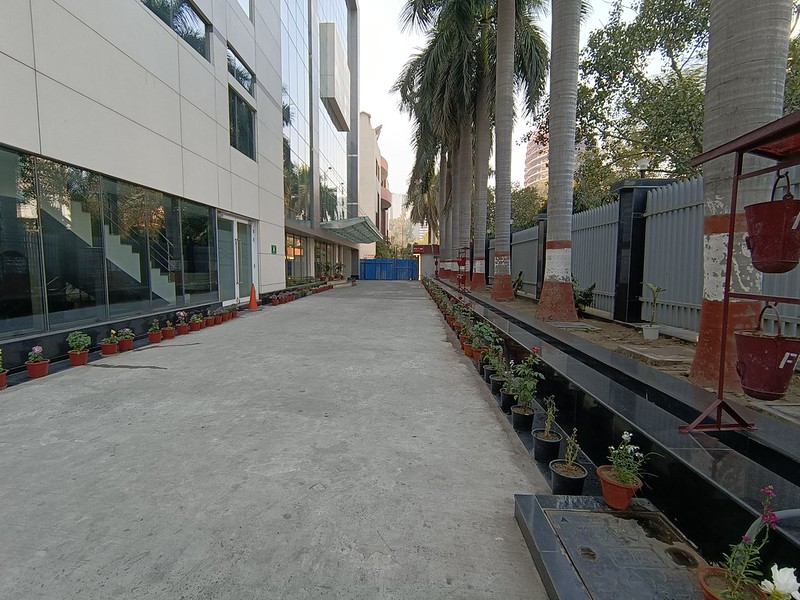 As for the selfies, this is where you get some processing. Although the images captured details and came out well, the beautification is what needs to tone down a bit.

The star, however, is the video section, which did quite well for me. 4K videos at both 30fps and 1080p videos at both 30fps and 60fps were quite decent. The Ultra Night video was pretty decent and worked decently like the Night mode on images, and the Dual-View video is a decent take on vlogging, YouTubing, and more. With videos becoming popular, a focus on it simply impresses. Among others, stabilization on both videos (and photos) was quite good. The Ultra Steady and the Ultra Steady Pro modes were able to help capture videos with good stability and worked fine in situations when you are recording in a car or while walking.

The Oppo Reno 5 Pro is the company’s first to get a MediaTek Dimensity 1000+. It is also the first Oppo phone with a MediaTek chip. This is also the processor used in the Realme X7 Pro, which is priced slightly on the lower side. The device multi-tasks with the help of 8GB of RAM and gets 128GB of internal storage.

The smartphone is able to handle whatever tasks you have for it, quite well. Watching videos, clicking photos, app-hopping was done with smoothness. There were hardly any lags and the time I used the device, it didn’t create trouble for me. Even gaming was pretty decent with the device. There wasn’t any heat production, the gameplay was decent, and the battery drop wasn’t noticeable. Games such as Candy Crush, FAU-G, and even a few word games to tease my brain, did decently. There weren’t any heat issues as such, except for the first time I charged my phone.

The device gets a 4,350mAh dual-cell battery, which means the battery is divided into two. This is deemed efficient for faster charging. The device supports 65W SuperVOOC 2.0 fast charging, and it is one of the best right now. The device consumes all the battery juice in about 30 to 35 minutes and I know if I am getting late for work and need to charge this phone and get ready within 30 minutes, both tasks will be accomplished (can’t say about the second one though!).

It runs ColorOS 11 based on Android 11 and a couple of days ago, it was a turn-off for me. But a few deep minutes into the UI and I realized it has changed over the years, for good. The little customizations, the goodness of Android 11, and the added features call for good usage. However, bloatware and not-so-smooth gesture navigation are downsides and I hope they are looked into. In addition, the audio quality has been pretty good. But, the speakers tend to resonate the sounds through the device. This might come across as likable for some for the ‘immersive’ audio experience, and annoying for others.  I didn’t like it much but this is totally subjective.

The Oppo Reno 5 Pro 5G is a phone that carries with it a number of things deemed perfect right now. There is support for a high refresh rate, a pretty good deal on the cameras, really fast charging, and the UI, which you will like, even if it’s a gradual process. And how can I forget the design that makes you go WOW!

For Rs 35,990, this smartphone is a good deal. While on papers, it competes with the likes of the Xiaomi Mi 10T and even the Realme X7 Pro (due to the same processor), the Oppo Reno 5 Pro tries to get in the league where OnePlus was a couple of years ago and made Android phones that proved to be just right. There might be competition but the Reno 5 Pro has all it takes to win. Of course, there might be some misses too; there are some issues with the cameras, and the UI can be better. However, those things can be sorted with future updates.

Hence, if you have the urge to get good cameras, an Oppo phone, and a lot many things I mentioned above, the Oppo Reno 5 Pro 5G will make up for a reason to go for it, without any thoughts.

Xiaomi reveals MIUI 12.5 globally: List of smartphones that will get the update

BookMyShow Stream lets you buy, rent latest movies: Here's how to use

Redmi K40 with dual stereo speakers to launch on February 25

Asus ROG Phone 5 peeks at us again via GeekBench listing

Xiaomi reveals MIUI 12.5 globally: List of smartphones that will get the update Web Story

More PlayStation 5 consoles are coming to Walmart on June 2nd

Samsung will charge $500 to put your face on its fridge

Garmin finally adds a camera to its Varia bike radar