Corsair’s K70 Pro Mini Wireless is the first keyboard from the company that includes hot-swappable switches. It means it offers a potent mix of Corsair’s gaming-focused features like low input latency and customizability. One of the core appeals of mechanical keyboards is their customizability. With the right keyboard, there’s an almost infinite amount of parts to upgrade, swap out, or customize to get a keyboard that precisely suits your needs. There’s obviously

p class="p--has-dropcap p-large-text" id="5E5ItR">One of the core appeals of mechanical keyboards is their customizability. With the right keyboard, there’s an almost infinite amount of parts to upgrade, swap out, or customize to get a keyboard that precisely suits your needs. There’s obviously nothing wrong with using a keyboard exactly as it comes out of the box, but sometimes it’s just plain fun to tinker.

Hot-swappable keyboard switches take this customizability a step further. Rather than having each key’s switch soldered to the board (meaning you have to whip out a soldering iron to change it), hot-swappable switches can be removed with a simple pulling tool. It makes replacing them as easy as changing a keycap. The feature has become more and more common on enthusiast boards, but it’s still relatively rare on keyboards from mainstream or gaming brands.

That makes Corsair’s K70 Pro Mini Wireless an interesting accessory. At first glance, it looks a lot like the kinds of mechanical gaming keyboards that Corsair has been producing for years with its aggressive gamer font and RGB lighting. But underneath, it’s the first keyboard from the company that includes hot-swappable switches. It means it offers a potent mix of Corsair’s gaming-focused features like low input latency and the customizability of enthusiast boards.

At $179.99, it’s expensive, and its compact 60 percent layout won’t be for everyone. But it ticks a lot of boxes if you’re willing to pay the price. 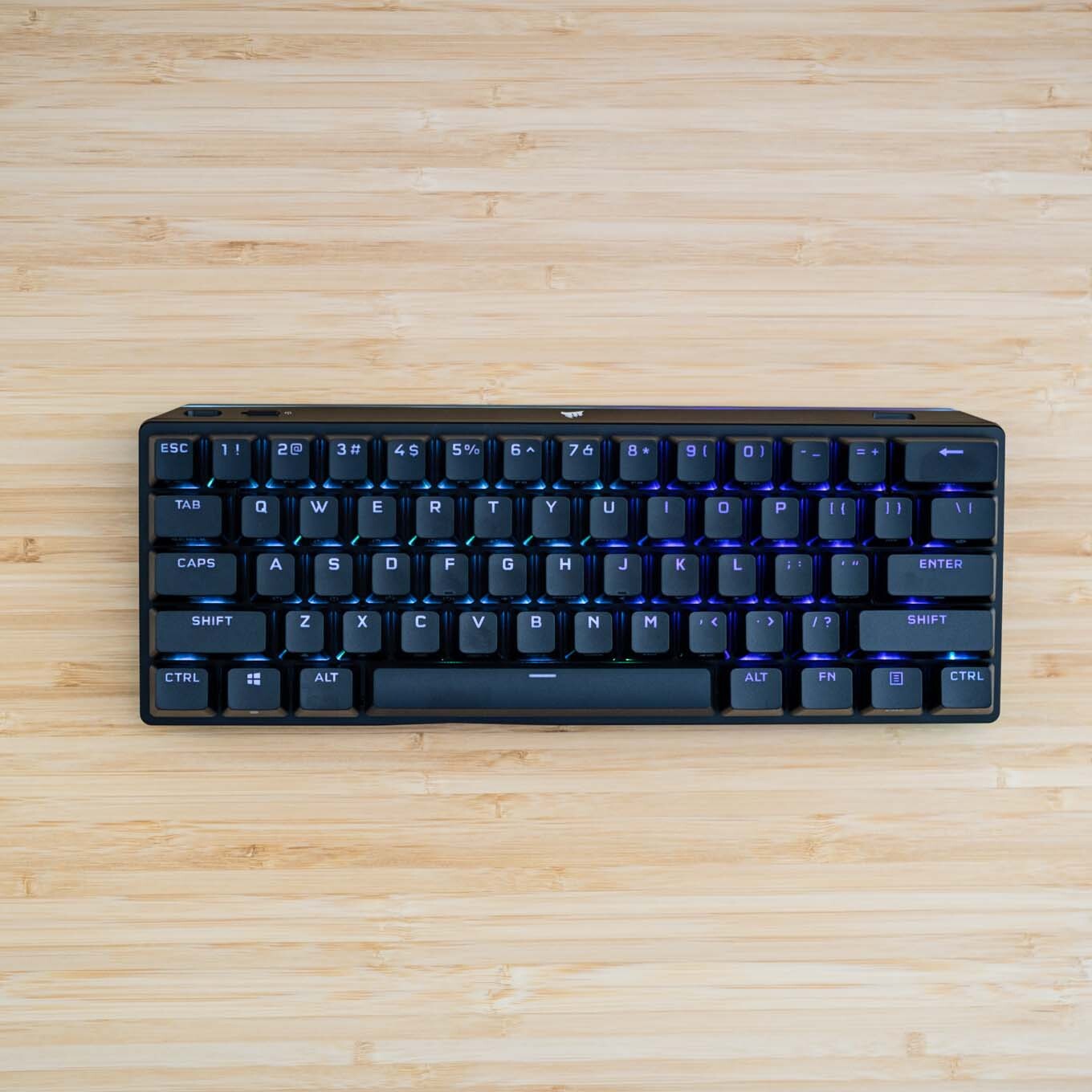 The Corsair K70 Pro Mini Wireless is very recognizably a Corsair product. It’s entirely black aside from its flashy RGB lighting, and each of its keys is styled with an aggressive all-caps font. Up top, there’s a single USB-C port for charging and connectivity, a physical on / off switch, and a small dock for the keyboard’s 2.4GHz USB dongle.

There’s no switch to put the keyboard in a macOS layout mode and no Mac-specific keycaps or legends. This is a Windows-focused keyboard — understandable given Corsair’s focus on gaming. Two feet on the underside of the keyboard let you set it at a steeper angle if you prefer.

Between its USB dongle, the ability to save up to three different Bluetooth connections, and good old-fashioned wired connectivity, there’s a good range of connectivity options. That said, some of them aren’t as responsive as others. You’ll have to use wired connectivity to get the keyboard’s maximum polling rate (where it’ll scan for keystrokes internally at 4,000Hz and report them to your PC at 8,000Hz), but it can only report at 2,000Hz when using its 2.4GHz dongle. Corsair doesn’t say what the keyboard’s polling rate is over Bluetooth, but typically, the wireless standard isn’t known for its low latency.

Corsair is only selling the K70 Pro Mini Wireless with either linear Cherry MX Red (which is what my review sample had) or gaming-focused linear Cherry MX Speed Silver switches, but the fact that it’s hot-swappable means you have a lot of other options if you’re willing to buy switches separately. You could swap in alternative Cherry switches, like tactile browns or clicky blues, or even more esoteric community options, like Holy Pandas or Gazzew Boba U4s. The world is, truly, your lobster.

Corsair includes the required switch puller in the box with the keyboard (there’s also a keycap puller) for removing the switches, and I was able to replace a couple with relative ease. The only problem here is that only three-pin (aka plate-mount) switches can fit in the keyboard’s circuit board, meaning that you’ll have to clip the plastic legs off five-pin (PCB-mount) switches to get them to fit. It’s not the end of the world, but it means you’ll have to pick your replacement switches carefully or be prepared to do a little modding. It’s not ideal when the selling point of hot-swap is simplicity.

It’s also, obviously, possible to swap out the K70 Pro Mini Wireless’ keycaps. There’s no immediate need to since the keycaps that come with the keyboard are durable double-shot PBT and allow the keyboard’s RGB backlighting to shine through. Also worth noting is that because each of these keys has a secondary function, there are a lot of additional legends printed on the sides of the keycaps. Replace the keycaps, and you might have a hard time remembering your keyboard shortcuts. Finally, the keyboard’s switches are orientated to be north-facing, which can create compatibility issues with some Cherry-profile keycaps.

The K70 Pro Mini Wireless is a very compact keyboard. It uses a 60 percent layout, which means that it lacks additional dedicated keys like a function row, numpad, or even arrow keys. The result is a keyboard that’s optimized for space-confined desks or even large desks when you want to absolutely maximize the amount of space your mouse gets.

If you’re a gamer who sometimes runs out of mouse space because of a big keyboard, a compact model like this can be really helpful. But, for others, such a restrictive layout is less ideal, and I struggled to use the K70 Pro Mini Wireless as a work keyboard over the past week. All of its “missing” keys are accessible via a function key on the bottom right of the keyboard, but having to press two keys just to access arrow keys is tiresome, and it only gets worse when you need to add more modifiers. I frequently had to press as many as four keys simultaneously while working, and it felt very inefficient. I wouldn’t recommend this keyboard for office work.

Nor is it a particularly great keyboard for typing. Although Corsair is using original Cherry switches, which are durable and long-lasting, the construction of the keyboard makes them sound cheap and plasticky, and they don’t feel as good as competing compact keyboards from Epomaker or Keychron. That’s doubly so for larger keys, whose stabilizers sound clinky and metallic.

The K70 Pro Mini Wireless feels a lot more at home when you’re using it for gaming, where you don’t miss the extra keys and (in theory) you have the most to gain from its reduced input latency. But I remain skeptical that most people can feel the benefits of polling rates above 1,000Hz. I tested the K70 Pro Mini Wireless by using it to play Overwatch on a 120Hz OLED display, first in its wired 8,000Hz polling mode (which needs to be manually enabled in Corsair’s iCue software) and then with its 2,000Hz dongle, and I couldn’t perceive any difference between it and a standard 1,000Hz keyboard. It’s reassuring that there seems to be no input lag penalty for using the keyboard wirelessly, but you shouldn’t go in expecting a big upgrade.

One aspect of the K70 Pro Mini Wireless that I didn’t expect to be useful, but were, are its mouse shortcuts. By default, pressing the Fn key along with WASD moves your mouse around the screen, and there are also shortcuts to speed the mouse’s movement up and slow it down, as well as for left and right-clicking. It’s inexact enough that I’d never recommend anyone try playing a game like this, but it’s a neat feature for people like me who have to control a gaming PC underneath their TVs with a wireless keyboard and trackpad. It means the K70 Pro Mini Wireless is a useful little tool that couch gamers might want to use for booting up a game to then play with a controller, although, at $180, it’s very expensive compared to the cheap wireless keyboard / trackpad combos that are readily available.

Battery life is OK but not exceptional, based on Corsair’s estimates (my testing involved regularly plugging the keyboard in via USB to test latency, so I wasn’t able to run it down consistently during my review period). It promises up to 32 hours with backlighting on, rising to 200 hours with it off. So expect to charge it weekly for the privilege of keeping its lights on or a little over once a month otherwise. That’s nothing compared to Logitech’s (otherwise lower-specced) $150 MX Mechanical Mini, which offers 15 days with backlighting on, or 10 months with it off, but roughly in line with the RGB model of Keychron’s $65 K12 (up to 240 hours with backlighting off).

With its compact 60 percent layout, the K70 Pro Mini Wireless is a keyboard that’s never going to be for everyone. It’s great that Corsair has caught up with the emerging trend towards hot-swappable switches, but if you’re looking for a compact keyboard that you’ll need to use for equal parts productivity and play, then my advice would be to — at a minimum — get a slightly larger 65-percent board that includes an arrow cluster. No amount of customizing switches or keycaps is going to make up for the missing keys.

Used primarily as a gaming keyboard, the K70 Pro Mini Wireless fares a lot better, and it’s nice getting the customizability of an enthusiast mechanical keyboard without giving up the quality of life features of a big brand like Corsair. But $180 is a lot to pay for a keyboard solely for gaming. The Corsair K70 Pro Mini Wireless may be a very customizable keyboard, but ultimately it’s not a very versatile one.

Photography by Jon Porter / The Verge

Every smart device now requires you to agree to a series of terms and conditions before you can use it — contracts that no one actually reads. It’s impossible for us to read and analyze every single one of these agreements. But we’re going to start counting exactly how many times you have to hit “agree” to use devices when we review them since these are agreements most people don’t read and definitely can’t negotiate.

You can technically use the Corsair K70 Pro Mini Wireless without having to install any Corsair software. But in order to unlock its full functionality, including being able to unlock its maximum polling rate, you’ll need to install Corsair’s iCue companion software, which involves agreeing to some terms and conditions:

You can also opt-in to marketing emails.

In total, that’s two mandatory agreements and one optional one if you want to use iCue.

Vergecast: Netflix vs. broadcast, Tesla sells its Bitcoin, and an upgrade to Thread

Trust me, you need a bookmarking app — and Raindrop is the best one

This solar-powered smart lock is also a video doorbell

Vergecast: Netflix vs. broadcast, Tesla sells its Bitcoin, and an upgrade to Thread Web Story

Trust me, you need a bookmarking app — and Raindrop is the best one Web Story